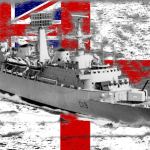 The Royal Navy main broadcast alarm is sound and the the following message is said when going to action stations; “Hands to Action Stations, Hands to Action Stations, Assume NBCD State 1 Condition Zulu” When this alarm is sounded then it basically means that all personnel are to close up at their action stations and that all watertight doors are clipped shut. NCBD State 1 Condition Zulu is actually the second highest state of readiness. If however the pipe said Assume NBCD State 1 Condition Zulu Alpha, then this would be an even higher state of readiness, as the Alpha bit means the ship may come under a chemical attack and therefore extra precautions (Creating a Citadel) need to be put in place. This would involve controlling ventilation to go through filters and also this ventilation is used to build up a pressure in the ship.

For those who have served in the Royal Navy, will know that the sound of the Main Broadcast Alarm means that there is a real problem or a need to protect the ship from some sort of threat.

If you are looking for other RN sounds, then you may enjoy these other Royal Navy Sound Effects.

I think that anyone watching this video will find it extremely annoying sound effect! I can not imagine that this mechanical sound effect could be in anyway relaxing. For some old salts, this may make the hairs on the back of their neck come to attention.

List of Royal Navy Ships During the Falklands War

Here is a list of UK ships and Royal Navy Ships from the Falklands war.

There are a couple of names in the above list that I do not recognise as having been in the Falklands War, maybe leave a comment if you see an error?