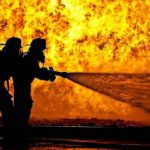 When serving on-board a Royal Navy warship, a fire is probably one of the most serious events that can happen. I recall in the mid 70’s, there would often be a real fire (usually in a machinery space) once a month. A fire on board a Royal Navy vessel has to be dealt with immediately and aggressively! There is not the ability to call on the fire brigade. However, other vessels in the vicinity can assist with the fire fighting. When a ship is at sea, fire exercises are carried out on a weekly basis. This ensures that all personnel are at their best to ensure that fires do not get out of control.

Are All Royal Navy Personnel Trained to Fight Fires?

Yes, prior to joining a Royal Navy ship, all personnel have to complete 3 courses. Fire Fighting Course; Sea Survival Course and a Damage Control course. This then ensures that all the ships company are able to deal with any situation that puts the ship at risk.

I have put together a standard long eight hour video of the the Fire Alarm that you would hear on a Royal Navy ship. The main broadcast alarm is sounded 3 times, followed by what the incident is, in this case a fire. After the words fire, there would be information as to where the fire is, in this case “3F A1” in other words the exact location on a ship where the fire was reported. 3 is the deck number, Foxtrot is the section of the ship, Alpha donates that it is a compartment in the forward section of Foxtrot, 1 tells you that it is on the starboard side of that section. This means that members the Attack Party can go straight to the scene of the fire.

The next part of the “pipe” tells members of the support party which section base they should muster at.

You may only want to hear this sound for a couple of seconds, or it could be the sort of mechanical sound effect that you want to hear over and over. I suppose if you really wanted to be cruel, you could use this sound to annoy your oppo?

If you are looking for other RN sounds, then you may enjoy these other Royal Navy Sound Effects.

Sometimes sound effects are not there just to relax to, maybe you want to use this sound to annoy someone else? Maybe if this is not the sound to annoy someone, then maybe there is another sound in the Sound and Vision Library the would be more suitable for your purpose. I have also converted some of the sound effect into a ringtone. Ringtones can also be found on this site. If however, there is long video that has not been converted into a sound effect that you want, then just drop me a line and I will create a ringtone for that sound. You can also leave a comment below. As the saying goes, if you don’t ask, you don’t get.