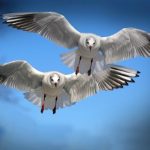 In this video you can pretend that you are near the seaside and listen to the sounds of gulls. Once again this video was created during the Covid 19 lockdown, so I had to borrow sound effects from other sites. Sadly also the image of the gull came from another site, but all the same, I hope that you enjoy this sound effect video.

Fall Asleep to the Sound of Sea Gulls

I understand that technically they are not called “Sea Gulls”, but should be refereed to as Gulls. However, I would not let this little detail worry you and stop you from drifting off to sleep as the gulls make their sounds. The sound of gulls may be something that takes you back to happy times by the sea, or sometimes, you hear the sound of gulls during harvest time for a short period in the fields on farmland.

*Ringtone* – This Gull Sound Effect is available as a ringtone: http://bit.ly/MTVRingtones

I would like to thank:
Recorded by Daniel Simion and also Pixabay for the photo.