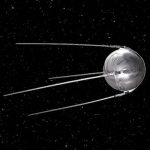 On the 4th of October 1957 the Soviet Union launched Sputnik 1. It orbited the earth for three weeks, transmitting the now familiar Beep Beep Sound Effect before the batteries died. However, Sputnik continued to orbit the earth for a further two months before it fell back into the earth’s atmosphere. Sputnik basically consisted of a 23 inch polished metal sphere and four radio antennas that emitted the radio sound effects. For further information check out Sputnik on Wikipedia.

For some people this may be a rather annoying sound effect, where as other may enjoy the beep, beep sound that was recorded when Sputnik orbited the earth. It is also said the launch of Sputnik sent shock waves of fear around the world! The USSR had shown the world just how powerful and advanced they were, by actually sending an object into space.

This video is a mainly so that you can hear the Sputnik Sound Effect as it orbited the Earth. I have also included a little animation of what the Sputnik actually looked like in space. Yes, I do know that I need to improve my animation skills, but I will keep practising.

I hope that you enjoy the Sputnik Sound Effect and Video.