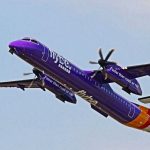 I think that also the droning of the turbo prop engines are the sort of sounds that will help a baby to fall asleep. Maybe give this particular relaxing sound effect video a go, to see if it does have a soothing effect on your baby?

In making this video I have started with a couple of pictures of the actual De Havilland Canada DHC-8 (Q400 – 8), then after a short period the screen will go black as you listen to the ambient sound effect created by the engines in the cabin.