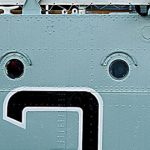 So here is a sound whoop whoop sound effect for you old salts out there. The is the sound that Royal Navy ships would make, often seen in old Royal Navy war films. I am not exactly sure when the whoop whoop alarm was phased out from the Royal Navy, but it is rather sad that it has been. I belong to a few RN groups and have asked what this particular alarm was used for. Sadly I did not get a proper confirmation reply from any ex Royal Navy personnel. It was suggested that the whoop whoop alarm was used to give audible commands, similar to the different commands sounded by foghorns on RN vessels today.

I am not so sure that anyone would find this a relaxing or ambient background sounds effect, but I am sure that there is someone out there that would appreciate this Royal Navy Sound Effects. Maybe though, you would want this sound effect to annoy a friend with. Well whatever you want this sound effect for, here it is for you to listen to for 8 hours.

So for your delight here is a wonderful 8 hour video or the Royal Navy Whoop Whoop sound effect. Also for those that are interested, the ship in this video is HMS Cavalier.

If you are looking for a particular sound effect that is 8 hours long, then please to leave a comment below in the comments section. I do answer all comments and will do my best to get that long sound effect to you.

Also please do leave me a comment if you served on an RN vessel that had the whoop whoop sound effect. I would really love to know exactly what this particular alarm was used for.

Does the Royal Navy Still use the Whoop Whoop Alarm?